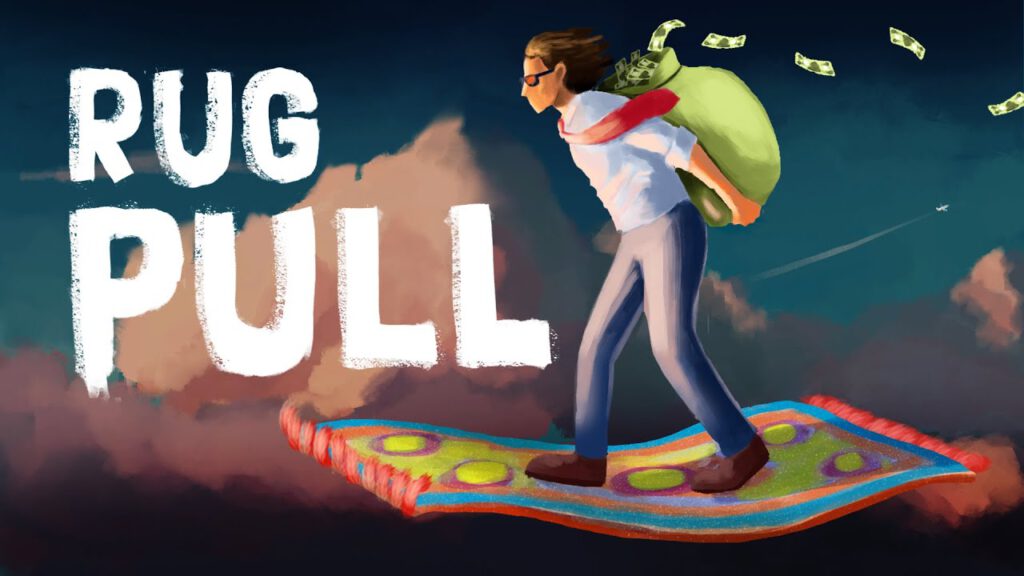 Rug pulls – what they are and how to spot them

Rug pulls are becoming an increasingly popular way to bring the Crypto, DeFi and NFT space into disrepute and to make a quick buck.

Rug pulls are when a project is hyped up, builds a community, and goes to mint only to plummet to zero (or very close) due to the founders jumping ship or simply not following through on their promises.

This leaves investors high and dry and brings the entire industry into question.

Being human means simply coming to terms with the fact that scams will always be around, but if you know what to look out for you can mitigate the chances of you yourself being rug-pulled.

We’ve discussed this topic extensively with industry experts, real users, and platform creators to try and protect you.

Although we’ll only discuss a handful of flags to look out for, we strongly recommend you continue to DYOR (Do Your Own Research) for every NFT project you may be interested in.

Simply put, in order for a cryptocurrency to be traded, a liquidity pool needs to be created that holds a certain amount of currency for investors to buy and sell.

In a rug pull, a developer will create a scam token and create the liquidity pool together with a legitimate currency like Ether.

As people start buying in and trading, they deposit ETH for the bogus token and when the time comes, the developer can pull the ETH from the liquidity pool leaving only the worthless scam tokens.

The investors are now left with essentially untradeable worthless tokens and the developer has sailed off into the sunset.

This occurs in both crypto and the NFT space. Essentially the end result is the same as the above but the process is slightly different.

Here, the developer/founder will disallow investors the opportunity to sell or trade their tokens after investing.

When the price is high enough, the developer will sell their share, causing the price to drop and leaving investors high and dry.

Some projects are created for the sole purpose of early exits by developers or founders. They would mint a useless token or “shitcoin” and assign a large amount to themselves before driving the hype or while the price is very low.

Once a rally has occurred and the price is high enough, the developer will sell their large amount of “shares” either at once or in stages (as to not be so obvious).

Red flags of a rug pull

Okay so we’ve discussed the broad types of rug pulls, but let’s see what the warning signs could be. As this is mostly NFT focused content we’ll steer the direction towards NFT project red flags and stay away from the DeFi side.

There are a handful of clear red flags that should give you an indication to watch out or practice more-than-normal caution before getting involved in a project:

Have a look at the project’s timeline (historically). If they have a proven track record of engagement, how long the project has been in the works and how they have been engaging with their community.

One area of this would be their website – if it is flooded with inaccuracies, errors, a vague roadmap, and NO TEAM, this should be an immediate warning.

We’ve previously discussed the importance of a doxxed (documented) team in NFT projects. In a nutshell, this gives the community and prospective investor peace of mind that the developers and founders can’t just slip away unnoticed.

Yes, there have been some doxxed teams that ended up being rug pulls like Squiggles and similar projects, but this is at least a reassurance that they are willing to put their name and face on a project.

Before any project launches, they tend to list their project on NFT announcement platforms like UpcomingNFT, NFTEvening, etc. to inform the NFT community of their upcoming mint.

These listings generally include the mint date, information about the project, the chain they’re launching on, and the mint price among other details.

If a project is hard to find other than their Discord, Twitter and Website, you should practice caution.

Roadmaps and whitepapers detail the proposed direction of a project. This gives prospective minters/investors an indication as to what to expect, the potential utility received, and the timelines.

These vary in technicality and length. Road maps are more often than not both on the website and Discord servers whereas whitepapers live on the website or could be requested from the developers or founders.

With influencers running wild on Twitter and Discord, it’s tough to distinguish the real followers vs the fake or “bought” followers.

Adding to that, a disproportionate amount of followers between Twitter and Discord could be a potential flag too. These large amounts of followers could be bots to give an illusion of community, wherein actual fact it’s nothing more than smoke and mirrors.

The above is the basic red flags to look out for – we could get very technical re liquidity, looking into the smart contract code, etc. but we’ll cover those in a future article.